Kunal Nayyar is a British Indian actor and writer known for his role as Rajesh Koothrappali in the CBS sitcom The Big Bang Theory.
After graduating, Nayyar found work doing American television ads and plays on the London stage. He first gained attention in the US for his role in the West Coast production of Rajiv Joseph’s 2006 play Huck & Holden, where he portrayed an Indian exchange student anxious to experience American culture before returning home. In 2006, Nayyar teamed up with Arun Das to write the play Cotton Candy, which premiered in New Delhi to positive reviews.
Nayyar made a guest appearance on the CBS drama NCIS in the episode “Suspicion” (season four, episode 12), in which he played Youssef Zidan, an Iraqi terrorist.
In 2012, Nayyar voiced Gupta in Ice Age: Continental Drift. That same year, he completed the shooting of his first film, Dr. Cabbie, in Toronto.
In September 2015, Nayyar published a book about his career journey, Yes, My Accent is Real.
He then voiced Guy Diamond in DreamWorks’ animated movie Trolls (2016).

Kirsten Caroline Dunst is the actress who played the role of Hedril in the Star Trek: The Next Generation seventh season episode “Dark Page” in 1993 when she was eleven years old. She is perhaps best known for her role as Mary Jane Watson in the blockbuster Spider-Man films.

Al Lewis (born Albert Meister) was an American character actor best known for his role as Count Dracula lookalike “Grandpa Munster,” opposite Fred Gwynne’s and Yvonne DeCarlo’s characters on the CBS television series The Munsters from 1964 to 1966 and its subsequent film versions. Later in life, he was also a restaurant owner, political candidate, and radio broadcaster. 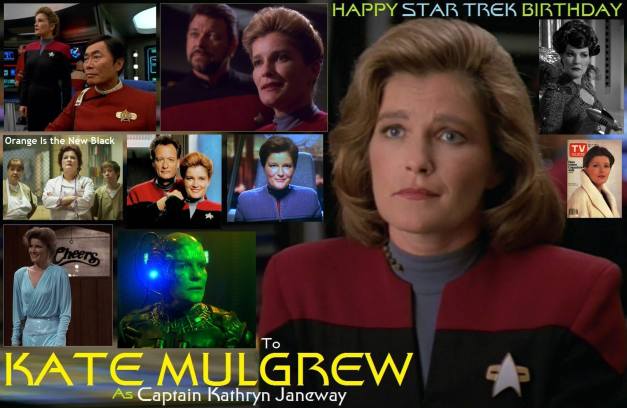 Kate Mulgrew is an actress who is best known for playing Captain Kathryn Janeway on Star Trek: Voyager. Before stepping into the role of a Starfleet captain, her claim to fame was playing Mary Ryan on the ABC soap opera Ryan’s Hope. Since then, she has been part of the main cast in the Netflix series Orange Is the New Black, for which she received an Emmy nomination for Outstanding Supporting Actress in a Comedy Series.

She was also in the movie Remo Williams: The Adventure Begins and guest starred in the TV series Warehouse 13.

Jessica Marie Alba is an American actress, model, and businesswoman. She began her television and movie appearances at age 13 in Camp Nowhere and The Secret World of Alex Mack (1994). Alba rose to prominence as the lead actress in the James Cameron television series Dark Angel (2000–2002) when she was 19 years old.

Alba has been called a sex symbol. She appears on the “Hot 100” section of Maxim and was voted number one on AskMen.com’s list of “99 Most Desirable Women” in 2006, as well as “Sexiest Woman in the World” by FHM in 2007. In 2005, TV Guide ranked her # 45 on its “50 Sexiest Stars of All Time” list. The use of her image on the cover of the March 2006 Playboy sparked a lawsuit by her, which was later dropped. She has also won various awards for her acting, including the Choice Actress Teen Choice Award and Saturn Award for Best Actress on Television, and a Golden Globe nomination for her lead role in the television series Dark Angel.

Eugenie Bondurant is an actress from New Orleans, Louisiana, who appeared in three episodes of Star Trek: The Next Generation. As a background actress she received no credit for her appearances.

Bondurant graduated from the University of Alabama and started her career as a runway model. She studied acting and has been teaching on-camera commercial workshops. Bondurant is a cancer survivor and motivational speaker for other people with cancer.

She appeared as Tigris in the fantasy sequel The Hunger Games: Mockingjay – Part 2 in 2015. 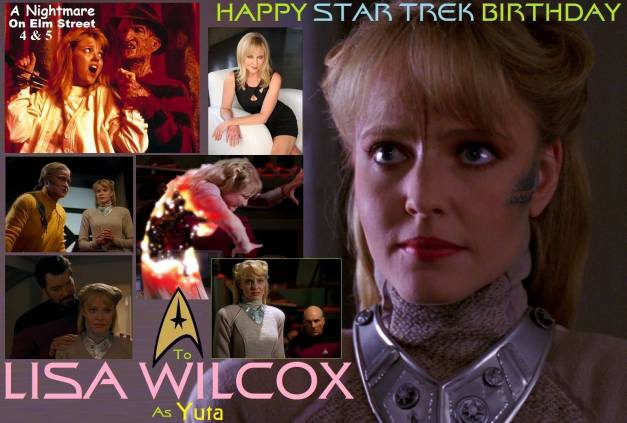 Lisa E. Wilcox is the actress who portrayed Yuta in the Star Trek: The Next Generation third season episode “The Vengeance Factor” in 1989. Hailing from Columbia, Missouri, USA, she studied theater at the University of California in Los Angeles.

In 1987, Wilcox had a regular role on the soap opera General Hospital. In 1989, she made recurring appearances on Knots Landing, starring fellow TNG guest actress Melinda Culea. And in 1992, she starred as Missy Preston on the short-lived, live-action version of Bill & Ted’s Excellent Adventures.

In addition to The Next Generation, the television shows in which Wilcox has guest-starred include Hardcastle & McCormick (1985, starring Brian Keith and Daniel Hugh Kelly), MacGyver (1987, with Lawrence Dobkin), Bodies of Evidence (1993, with Jennifer Hetrick and Jennifer Parsons), Murder, She Wrote (1994, with Robert Curtis Brown and Bruce Gray), Walker, Texas Ranger (1998, starring Noble Willingham), and Chicago Hope (1998, with Jeff Allin).

Wilcox played the title role in the short film The All New Adventures of Chastity Blade (2000) and played Florence Henderson in the television movie Unauthorized Brady Bunch: The Final Days (2000). She can also be seen in the films Men Seeking Women (1997) and Watchers Reborn (1998).

Between 2000 and 2007 Wilcox took an acting break and co-founded the jewelry and fashion company Toe Brights.

Wilcox had a guest role in two episodes of the drama series Big Shots (2007, with Jessica Collins, Rick Scarry, and Wayne Thomas Yorke) and in the pilot episode of David E. Kelley’s comedy series Harry’s Law (2011, with Ivar Brogger), starred in the drama The Intruders (2009) and the science fiction thriller Savage (2009), was part of the main cast in the short horror series Fear Clinic (2009, co-starring Kane Hodder and produced by Bobbi Sue Luther), and completed the thriller Sebastian (2011, with Meg Foster). 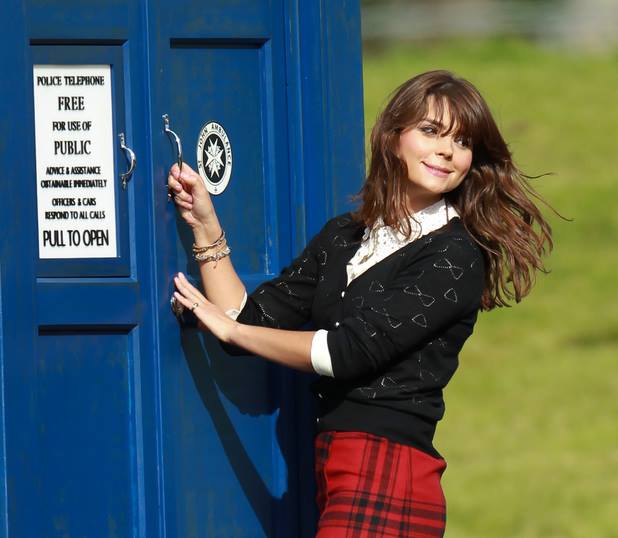 Jenna-Louise Coleman,known as Jenna Coleman is an English actress.
Coleman was born in Blackpool, Lancashire, and began her acting career at an early age as a member of a theatre company called In Yer Space
While auditioning for drama schools in 2005, Coleman was chosen to play Jasmine Thomas in Emmerdale. She received critical acclaim for her performance and was nominated for the Most Popular Newcomer award at the 2006 National Television Awards. She went on to play “hard girl” Lindsay James in the BBC school-based drama series Waterloo Road, Susan Brown in a BBC Four television adaptation of the John Braine novel Room at the Top, Annie Desmond in Julian Fellowes’ four part mini-series Titanic, and Rosie in Stephen Poliakoff’s original drama series Dancing on the Edge. She made her feature film debut in 2011 in Captain America: The First Avenger.
Since 2012, Coleman has portrayed Clara Oswald, companion to the eleventh and twelfth incarnations of the Doctor in the science fiction series Doctor Who. She appeared as Lydia Wickham in the BBC drama Death Comes to Pemberley. 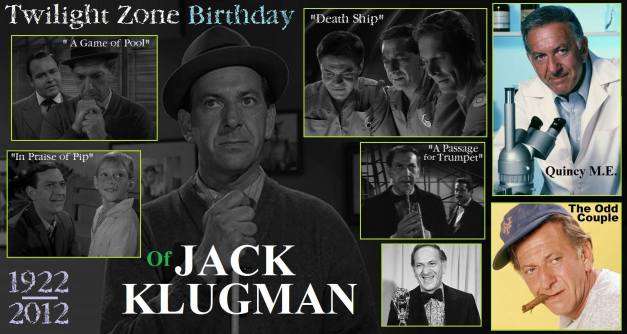 Klugman began his career in 1950. He later moved on to television and film work with roles in 12 Angry Men (1957) and Cry Terror! (1958). During the 1960s, he guest-starred on numerous television series. Klugman won his first Primetime Emmy Award for his guest-starring role on The Defenders, in 1964. He also made a total of four appearances on The Twilight Zone from 1960 to 1963.

In 1970, Klugman reprised his Broadway role of Oscar Madison in the television adaptation of The Odd Couple, opposite Tony Randall. The series aired from 1970 to 1975. Klugman won his second and third Primetime Emmy Awards and a Golden Globe Award for his work on the series. From 1976 to 1983, he starred in the title role in Quincy, M.E. for which he earned four Primetime Emmy Award nominations. In 1985 he appeared in an episode of The Love Boat entitled “Scandinavian Cruise” parts 1 & 2.

A longtime smoker, Klugman was diagnosed with throat cancer in 1974. The cancer returned in 1989. During the course of treatment, Klugman lost a vocal cord which left him with a raspy voice.

Klugman married actress Brett Somers in 1953. The couple had two children before separating in 1974. They never divorced and were still married when Somers died in 2007. He married Peggy Crosby, with whom he had lived since 1988, the following year.