Vincent Philip D’Onofrio is an American actor, director, producer, writer, and singer. He is known for his roles as Private Leonard Lawrence (“Gomer Pyle”) in the war film Full Metal Jacket, Edgar in Men in Black, and Detective Robert Goren in the crime television series Law & Order: Criminal Intent. He has also co-starred in The Judge, Run All Night, and Jurassic World, and currently portrays Wilson Fisk/Kingpin in the Netflix series Daredevil, based on the Marvel comics series of the same name.

María Conchita Alonso, better known as María Conchita, is a Cuban-born, Venezuelan-raised singer/songwriter and actress.
She made her Hollywood film debut in 1984 in Moscow on the Hudson with Robin Williams, and also starred in movies like Extreme Prejudice, The Running Man, Predator 2, Touch and Go, The House of the Spirits, Vampire’s Kiss and Colors.

She was one of the few Latin-born actresses to star in a Broadway show in 1995, playing Aurora in Kiss of the Spider Woman. She later acted in romantic comedies like Chasing Papi (2003) and The Last Guy on Earth (2006).

Alonso was cast to play Lucía, the mother of Gabrielle Solis, on the ABC hit show Desperate Housewives. The episode was aired on February 19, 2006. She was in the Latin version Amas de Casa Desesperadas for Univision Network. She was a guest star in the live-action film of the comic book El Muerto and appeared in the film Material Girls (2006).

Alonso hosted VH1’s Viva Hollywood! on April 13, 2008 with Carlos Ponce. She portrayed Sam in the Werewolf horror film Wolf Moon, which was directed by Dana Mennie. 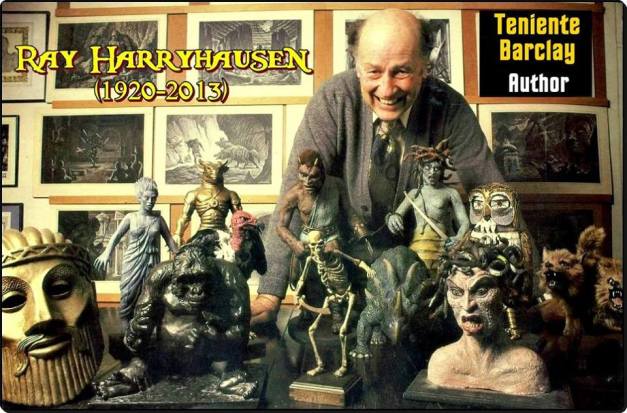 His most memorable works include the animation on Mighty Joe Young (1949), with his mentor Willis H. O’Brien, which won the Academy Award for Best Visual Effects; The 7th Voyage of Sinbad (1958), his first color film; and Jason and the Argonauts (1963), featuring a famous sword fight with seven skeleton warriors. His last film was Clash of the Titans (1981), after which he retired.

Harryhausen moved to the United Kingdom and lived in London from 1960 until his death in 2013. During his life, his innovative style of special effects in films inspired numerous filmmakers including George Lucas, Steven Spielberg, John Lasseter, Peter Jackson, John Landis, Joe Dante, and Tim Burton. 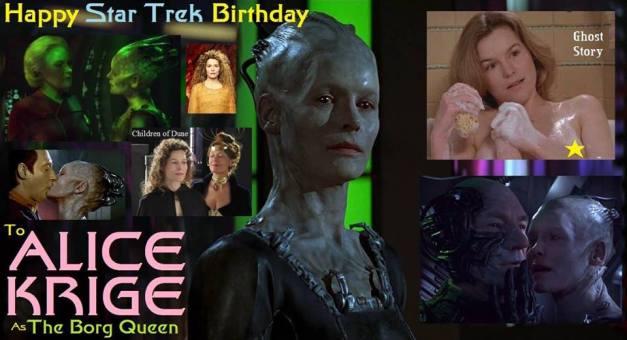 Alice Maud Krige is an actress who was introduced to the world of Star Trek in 1996, when she played the Borg Queen in the film Star Trek: First Contact. She went on to reprise the role in the Star Trek: Voyager series finale, “Endgame”, and can also be heard in the video game Star Trek: Armada II and at Star Trek: The Experience.
Krige attention in 1981 when she made a colorful feature film debut in the acclaimed drama Chariots of Fire, which went on to win the Academy Award for Best Picture. In this film, Krige portrayed the wife of the lead character, Jewish athlete Harold Abrahams, who was played by Ben Cross. Star Trek: Enterprise guest star Dennis Christopher also had a role in the film.

Since then, she has played supporting roles in a number of other films, including Ghost Story (1981, with Craig Wasson, Robin Curtis, and Jacqueline Brookes), Barfly (1987), Haunted Summer (1988, co-starring Philip Anglim), See You in the Morning (1989, with George Hearn and Theodore Bikel), Sleepwalkers (1992, with Mädchen Amick, Ron Perlman, and Frank Novak), Twilight of the Ice Nymphs (1997, with Frank Gorshin), and The Little Vampire (2000). Krige has worked with David Warner on two films: the 1988 comedy Spies Inc. and the 2001 thriller Superstition.

Krige also had a small role in the 2002 film Reign of Fire, playing the mother of the main character. DS9 star Alexander Siddig was among the stars of this film. In 2006, Krige was seen in the horror films Stay Alive and Silent Hill, as well as the crime thriller Lonely Hearts. In 2008, Krige was cast in the film Solomon Kane, based on the pulp magazine character created by Robert E. Howard. Krige was seen in Jerry Bruckheimer’s The Sorcerer’s Apprentice (2010) co-written by Lawrence Konner.
Krige’s earliest American television work was the 1984 CBS mini-series Ellis Island, which also featured Ben Vereen. In 1986, Krige was a part of the cast of the TV mini-series Dream West, as were her First Contact co-stars Jonathan Frakes and James Cromwell. F. Murray Abraham, Anthony Zerbe, Fritz Weaver, Lee Bergere, Michael Ensign, Matt McCoy, Noble Willingham, and Glenn Morshower also had roles in the series.

Krige has guest-starred on such television drama series as Murder, She Wrote (with George Murdock), Beverly Hills, 90210, and Law & Order: Criminal Intent. In 1999, she played a rare comedy role as the ex-wife of Dr. John Becker (played by Ted Danson) in one episode of the sitcom Becker, on which Terry Farrell was a regular. In 2002, Krige made two appearances on HBO’s Six Feet Under: one episode with Julianna McCarthy and another with David Andrews, Michael Bofshever, Joel Brooks, Graham Jarvis, Kristopher Logan, Nan Martin and Amy Wheaton.

Krige portrayed Lady Jessica Atreides in the Sci-Fi Channel’s 2003 mini-series Children of Dune, which also starred Alec Newman and Steven Berkoff. She later played Joan Collins in the 2005 TV movie Dynasty: The Making of a Guilty Pleasure. In 2005, she was a regular on the acclaimed HBO series Deadwood, which co-starred Jim Beaver, Brad Dourif, Paula Malcomson, and Leon Rippy. In 2006, she appeared in a two-part episode on René Echevarria’s science fiction series The 4400.

Other television projects include the 1991 mini-series The Strauss Dynasty (with John Rhys-Davies)In 1994 she starred as ‘La Marquesa’ in an episode of the ITV historical drama ‘Sharpe'(with Sean Bean), and the movies Second Serve (1986, with Jeff Corey and Louise Fletcher), Baja Oklahoma (1988, with Anthony Zerbe), Ladykiller (1992, with Bob Gunton and Bert Remsen), Jack Reed: Badge of Honor (1993, with Neal McDonough, William Sadler, Bruce French, and Bill Bolender), Donor Unknown (1995, with Clancy Brown and Steven Culp), and Hidden in America (1996, with Bruce Davison). She was most recently seen in an episode of Dirty Sexy Money in 2008, along with series regular Zoe McLellan.

Billy Curtis born Luigi Curto, played a “small copper-skinned ambassador” in TOS: “Journey to Babel”, for which he went uncredited. He filmed his scene on Monday 25 September 1967 at Desilu Stage 9.

Curtis’ film career started in 1938 with the starring role in the film The Terror of Tiny Town. A year later he had a role in the classic movie The Wizard of Oz. Curtis went on to appear in over eighty movie and television roles. In 1951, he played an uncredited “Mole-Man” in the film Superman and the Mole-Men, which featured Jeff Corey. Seven years later he starred (wearing a dog costume) in the failed television pilot The Adventures of Superpup. In 1952, he appeared in a small role in Charles Chaplin’s Limelight, which also featured Morgan Farley. In 1966, he appeared in two episodes of Batman, playing one of the henchmen of False Face, portrayed by Malachi Throne. In 1968, Curtis portrayed a child ape in the science fiction classic Planet of the Apes, which role also went uncredited. The film featured James Daly, Lou Wagner, Paul Lambert, Jane Ross, Felix Silla, music by Jerry Goldsmith and designs by Wah Chang. He also played a small role as a circus midget in another classic science fiction film, The Incredible Shrinking Man (1957), written by Richard Matheson (based on his own novel) and featuring William Schallert. He also appeared in a 1981 episode of Buck Rogers in the 25th Century with Felix Silla, and directed by Vincent McEveety. Apart from science fiction, Curtis’ most famous film is Clint Eastwood’s 1973 western High Plains Drifter, in which his co-stars included Marianna Hill and William O’Connell.

Renata Scott is the Austrian actress who played Admiral Hayes in the Star Trek: The Next Generation sixth season episode “Realm of Fear” in 1992. 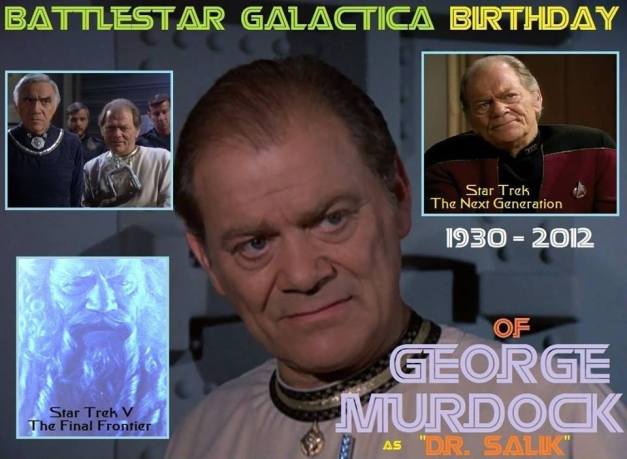 In the pre-production of Star Trek V: The Final Frontier, director William Shatner had originally planned to cast Murdock for the role of Korrd, but when Charles Cooper read for the role, Murdock was recast for the role of ‘God.’ Shatner described the scenario as “a rather strange way of finding the right roles, but it worked out perfectly.” (Captain’s Log: William Shatner’s Personal Account of the Making of Star Trek V: The Final Frontier)

Murdock is probably best known by fans for two recurring roles, as Lt. Ben Scanlon, the acerbic Internal Affairs officer on Barney Miller and the overstressed and bitter Dr. Salik on the original Battlestar Galactica.

He was one of several Star Trek stars to appear in the 1992 television movie Grand Tour: Disaster in Time. Others included Lori Lively, Nicholas Guest, Emilia Crow, Time Winters and Mimi Craven. Murdock died of cancer at Providence St. Joseph Medical Center in Burbank on 30 April 2012. He was 81.

June Lockhart is an American actress, primarily in 1950s and 1960s television, also with memorable performances on stage and in film. She is remembered as the mother in two TV series, Lassie and Lost in Space. She also portrayed Dr. Janet Craig on the CBS television sitcom Petticoat Junction (1968–70). She is a two-time Emmy Award nominee and a Tony Award winner. 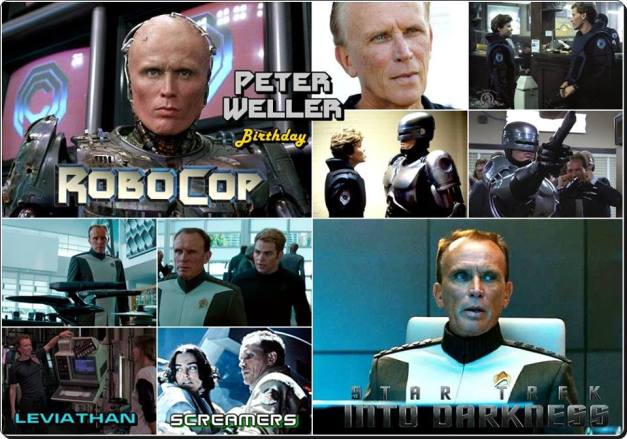 Weller is perhaps best known to science fiction genre fans for playing the title role in 1987’s RoboCop and its 1990 sequel, RoboCop 2. He is also known for playing the title role in the cult 1984 science fiction film, The Adventures of Buckaroo Banzai Across the 8th Dimension, and for starring in Manny Coto’s 2002 cable television series, Odyssey 5.

Whedon, the force behind the “Buffy The Vampire Slayer” series, “Firefly” and the Avengers movies.