Posted by travelingwithjim on May 31, 2018
Posted in: may, Random TV. Leave a comment

Gregory Neale Harrison is an American actor. He is known for his role as Chandler in the 1987 cult favorite North Shore and as Dr. George Alonzo “Gonzo” Gates on the CBS series Trapper John, M.D. 1979-85 and he was the title character on the 1977-78 science fiction series Logan’s Run, after which he played the role of Levi Zendt on the 1978 NBC miniseries Centennial.

Posted by travelingwithjim on May 31, 2018
Posted in: may, Random Movie, Random TV. Leave a comment

Lea Katherine Thompson is an American actress, television director, and television producer. She is best known for her role as Lorraine Baines in the Back to the Future trilogy and as the title character in the 1990s NBC sitcom Caroline in the City. Other films for which she is known include All the Right Moves, The Beverly Hillbillies, Howard the Duck, Jaws 3-D, Red Dawn, and Some Kind of Wonderful. Since 2011, she has co-starred as Kathryn Kennish in the ABC Family series Switched at Birth.

Posted by travelingwithjim on May 30, 2018
Posted in: lost in space, may, Random Movie, Random TV, Star Trek. Leave a comment 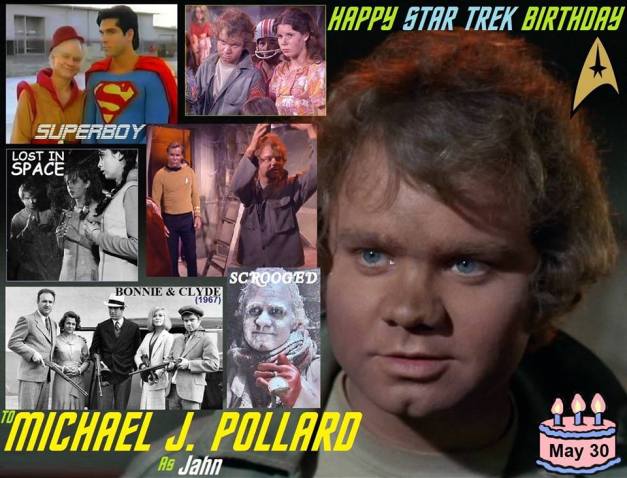 Michael John Pollack, Jr., better known as Michael J. Pollard and also affectionately referred to as “Spud Pollard”, is the actor who played Jahn in the Star Trek: The Original Series episode “Miri”. He was originally considered for the role of Charles Evans in “Charlie X”.

Pollard has been acting since 1958. A character actor, he has accumulated almost a hundred appearances in movies and television series since then. He was 27 at the time he portrayed Jahn, a teenage character, but his baby-faced looks won him the role.

In 1967, Pollard earned an Academy Award nomination as Best Actor in a Supporting Role for his role of C.W. Moss in the film Bonnie and Clyde. He also earned two Golden Globe nominations for that role, one for Best Supporting Actor and one for Most Promising Newcomer. In addition, his performance in Bonnie and Clyde won Pollard a BAFTA Award as Most Promising Newcomer to Leading Film Roles.

Also in 1967 he and Angelique Pettyjohn appeared together in an episode of The Girl from U.N.C.L.E. (“The U.N.C.L.E. Samurai Affair”).

Posted by travelingwithjim on May 30, 2018
Posted in: Battlestar Galactica, Doctor Who, Firefly, may, Random TV, Star Trek, Star Trek Voyager, Supernatural, The X-Files. Leave a comment

Mark A. Sheppard is a British actor known for playing Leucon, the father of Icheb, in the Star Trek: Voyager episode “Child’s Play”. He is the son of fellow Voyager guest star W. Morgan Sheppard, making him one of the few children of a Star Trek guest actor to appear on Star Trek. Despite a similar name, Mark A. Sheppard should not be confused with Mark Allen Shepherd who portrayed Morn on Star Trek: Deep Space Nine.

He directed his father and Star Trek: Deep Space Nine star Salome Jens in Room 101. He also appeared in Joss Whedon’s series Firefly, alongside various Trek actors such as Ron Glass. He also had a recurring role as a villain in the hit series 24.

In 2006, Sheppard appeared on Ronald D. Moore’s re-imagined Battlestar Galactica. In 2007, he joined the cast of Bionic Woman, where he clashed with former Star Trek III: The Search for Spock actor, Miguel Ferrer.

In 2008 and 2009, Sheppard appeared on the series Leverage.  He also has a recurring role as FBI agent Tanaka in Joss Whedon’s fantasy series Dollhouse (2009).

In 2011, Sheppard appeared in Doctor Who, alongside his father who played an older version of the same character. This places Mark Sheppard and W. Morgan Sheppard among the small number of actors who have appeared in both the Star Trek and Doctor Who franchises.

Sheppard plays Crowley, the “King of Hell,” a recurring character on the CW show Supernatural.

Posted by travelingwithjim on May 30, 2018
Posted in: may, Random TV, Star Trek, star trek deep space nine, Star Trek The Next Generation. Leave a comment 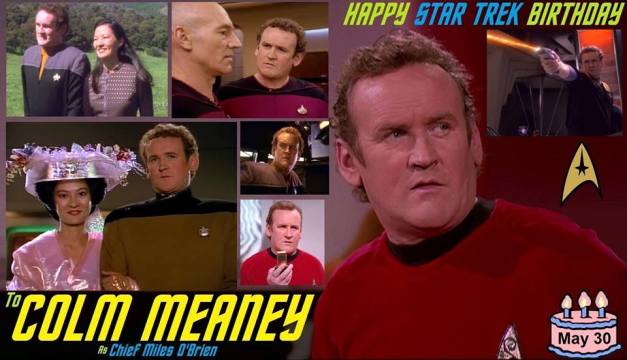 Colm J. Meaney is the Irish actor best recognized by Star Trek fans for his portrayal of Chief Miles O’Brien on both Star Trek: The Next Generation and Star Trek: Deep Space Nine from 1987 through 1999. He also played Albert Macklin in the acclaimed episode “Far Beyond the Stars”.

On TNG, he appeared in 52 episodes. Across both series, he appeared in 211 episodes, second only to Michael Dorn in total number of appearances in the franchise. He is the only actor to have appeared in the pilots and final episodes of Star Trek: The Next Generation and Star Trek: Deep Space Nine.

Posted by travelingwithjim on May 29, 2018
Posted in: may, Random TV, Star Trek, star trek deep space nine. Leave a comment 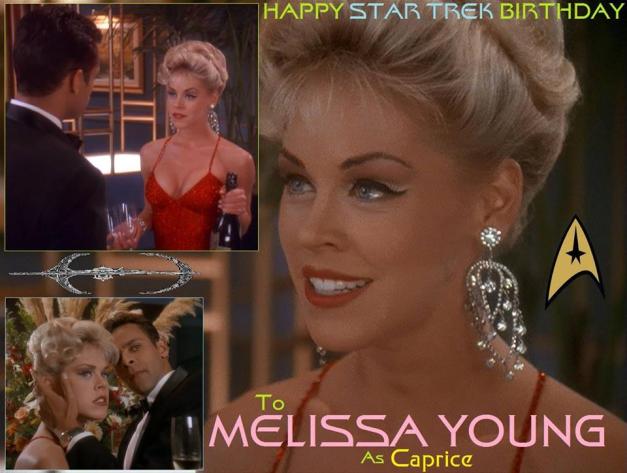 She has guest-starred in other popular series such as Growing Pains and Beverly Hills, 90210. She also appeared as one of the hopeful brides in contention to wed Rick Rockwell in the reality TV show Who Wants to Marry a Multi-Millionaire?.

Posted by travelingwithjim on May 29, 2018
Posted in: Doctor Who, may, Random TV. Leave a comment 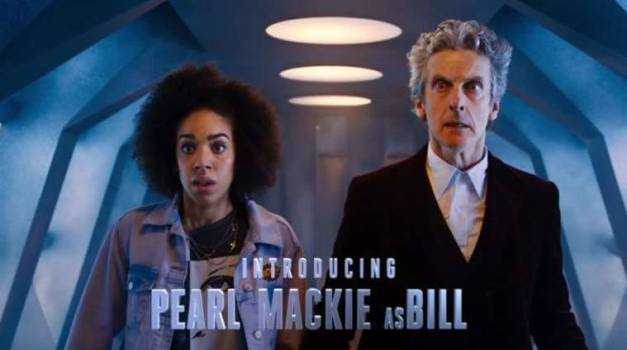 Pearl Mackie is a British actress, dancer and singer. She was named on 23 April 2016 as having been chosen by the BBC to play the next companion to The Doctor, Bill, in the long running television series Doctor Who. Mackie is a 2010 graduate of the Bristol Old Vic Theatre School, and in 2014 played Anne-Marie Frasier in Doctors.

Posted by travelingwithjim on May 29, 2018
Posted in: may, Random Movie, Random TV, Star Trek. Leave a comment

Julie Cobb played Yeoman Leslie Thompson in the Star Trek: The Original Series episode “By Any Other Name”. She filmed her scenes on Friday 10 November 1967 at Desilu Stage 10. She is the daughter of noted actor Lee J. Cobb, the mother of Star Trek: Voyager guest star Rosemary Morgan (whom she accompanied to the set, as Morgan was a minor at the time) and the ex-wife of James Cromwell, who played Zefram Cochrane.

She and DS9 guest star Kate Asner both appeared in the motion picture Dr. Jekyll and Ms. Hyde.

More recently Cobb appeared in the 2007 film The Happiest Day of His Life, co-starring Harry Groener and Seymour Cassel, and the 2008 film Jelly along with her daughter Rosemary, and Rick Overton (from Trekkies).

Posted by travelingwithjim on May 29, 2018
Posted in: may, Random Movie, Star Wars. Leave a comment

Sebastian Lewis Shaw was an English actor, director, novelist, playwright and poet. During his 65-year career, he appeared in dozens of stage performances and more than 40 film and television productions.

Shaw was born and brought up in Holt, Norfolk, and made his acting debut at age eight at a London theatre. He studied acting at Gresham’s School and the Royal Academy of Dramatic Art. Although he worked primarily on the London stage, he made his Broadway debut in 1929, when he played one of the two murderers in Rope’s End. He appeared in his first film, Caste, in 1930 and quickly began to create a name for himself in films. He described himself as a “rotten actor” as a youth and said his success was primarily due to his good looks. He claimed to mature as a performer only after returning from service in the Royal Air Force during World War II.

Shaw was particularly known for his performances in productions of Shakespeare plays which were considered daring and ahead of their time. In 1966, he joined the Royal Shakespeare Company, where he remained for a decade and delivered some of his most acclaimed performances. He also wrote several poems and a novel, The Christening, in 1975. He is also known for his brief but important performance in Return of the Jedi, the original third installment in the Star Wars franchise, in which he portrayed an unmasked Darth Vader and Anakin Skywalker’s ghost in the original version of the film.

Posted by travelingwithjim on May 29, 2018
Posted in: Doctor Who, may, Random Movie, Random TV. Leave a comment

Kylie Ann Minogue is an Australian-British singer and actress. She achieved recognition starring in the Australian soap opera Neighbours, where she played tomboy mechanic Charlene Robinson. Since then, Minogue has been a recording artist and has achieved commercial success and critical acclaim in the entertainment industry.
Minogue made her film debut in The Delinquents (1989) and portrayed Cammy in Street Fighter (1994). Minogue has also appeared in the films Moulin Rouge! (2001), Jack & Diane, and Holy Motors (2012). In 2014, she appeared as a judge on the third series of The Voice UK and The Voice Australia.
She co-starred in the 2007 Doctor Who Christmas special episode, “Voyage of the Damned”, as Astrid Peth. The episode was watched by 13.31 million viewers, which was the show’s highest viewing figure since 1979.