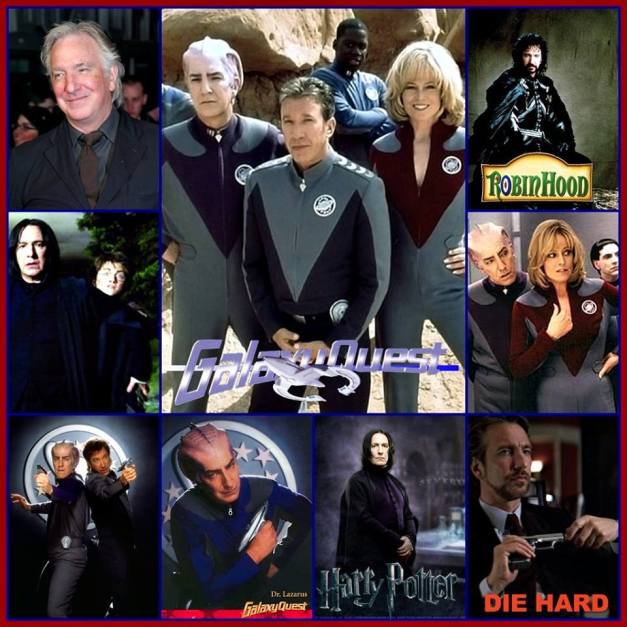 Alan Sidney Patrick Rickman  was an English actor. Rickman wass a former member of the Royal Shakespeare Company in both modern and classical theatre productions. His breakout performance was as the Vicomte de Valmont in Les Liaisons Dangereuses, for which he was nominated for a Tony Award. Alan Rickman is well known for his film performances as Hans Gruber in Die Hard, Sheriff of Nottingham in Robin Hood: Prince of Thieves (for which he won the BAFTA Award for Best Actor in a Supporting Role in 1991), Severus Snape in the Harry Potter film series, Éamon de Valera in Michael Collins, Metatron in Dogma, and Ronald Reagan in The Butler.

Rickman has also had a number of other notable film roles such as Jamie in Truly, Madly, Deeply, Colonel Brandon in Ang Lee’s 1995 film Sense and Sensibility, Harry in Love Actually, P.L. O’Hara in An Awfully Big Adventure. More recently, he played Judge Turpin in the film adaptation of Stephen Sondheim’s musical of Sweeney Todd: The Demon Barber of Fleet Street. In 1995, he was awarded the Golden Globe, Emmy Award and Screen Actors Guild Award for his portrayal of Rasputin in Rasputin: Dark Servant of Destiny.

Rickman has won a BAFTA Award, a Golden Globe Award, an Emmy Award and a Screen Actors Guild Award. He has been nominated twice for a Tony Award and several times for a BAFTA Award.

During his long career Rickman has also played a number of comedic roles, sending up classically trained British actors who take on “lesser roles” as the character Sir Alexander Dane/Dr. Lazarus in the science fiction spoof Galaxy Quest, portraying the angel Metatron, the voice of God, in Dogma, appearing as Emma Thompson’s foolish husband Harry in Love Actually, providing the voice of Marvin the Paranoid Android in The Hitchhiker’s Guide to the Galaxy, and the egotistical, Nobel Prize-winning father in Nobel Son.

Rickman died of pancreatic cancer on 14 January 2016 at the age of 69. His final film role is as the voice of Absolem in Alice Through the Looking Glass,