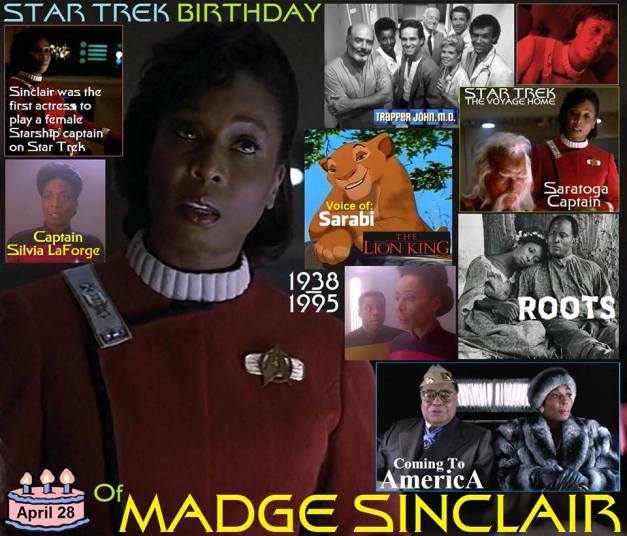 Madge Sinclair was an Emmy Award-winning Jamaican-born American actress who made two appearances in the Star Trek franchise. She first portrayed the captain of the USS Saratoga in Star Trek IV: The Voyage Home. Although she did not receive on-screen credit for this role, she was the first female Starfleet captain to be seen in the history of Star Trek. She later played Captain Silva La Forge in the Star Trek: The Next Generation seventh season episode “Interface” in 1993.

Outside of Star Trek, Sinclair is perhaps best remembered for her six-year, three-time Emmy Award-nominated role as Nurse Ernestine Shoop on the CBS television drama series Trapper John, M.D. She is also known for her Emmy-nominated portrayal of Bell Reynolds in the ground-breaking mini-series Roots, for her roles in the films Conrack (1974), Convoy (1978), and Coming to America (1988), and for voicing Queen Sarabi in Disney’s The Lion King (1994). She is noted for her frequent collaboration with Academy Award-nominated actor James Earl Jones (which includes the aforementioned Coming to America and The Lion King, in which they played king and queen), though she has also had a long professional history with her on-screen The Next Generation son, LeVar Burton.