Nicknamed “The Neck” for his prominent neck muscles, Alaimo influenced makeup supervisor Michael Westmore’s design of the Cardassian makeup, as Westmore based the race’s neck ridges on Alaimo’s physique.

His work on Somerset was followed with guest appearances on many TV shows, usually playing the villain. Some of the shows on which he appeared include Kojak (in an episode with Yvonne Craig), The Rockford Files, Gunsmoke (with George Murdock and series regular Charles Seel), Barnaby Jones (with series regular Lee Meriwether), Baretta, Starsky & Hutch (several episodes, including one with James B. Sikking and all starring David Soul), The Hardy Boys/Nancy Drew Mysteries (with Phillip Richard Allen, Michael Pataki, and William Schallert), CHiPs (two episodes – one with Ellen Geer and another with DS9 co-stars Michael Dorn and Barry Jenner; both also featured Robert Pine), The Incredible Hulk (several episodes, including one with Charles Napier), Wonder Woman, Charlie’s Angels, Quincy M.E. (with Robert Ito and Garry Walberg), Knight Rider, The Fall Guy (two episodes, including one with Marshall R. Teague and Ian Wolfe), T.J. Hooker (two episodes – one with Lloyd Haynes, Robert O’Reilly, and series regular Richard Herd, and both starring William Shatner and James Darren), Hardcastle and McCormick (starring Brian Keith and Daniel Hugh Kelly in the title roles), Hunter (with series regular Bruce Davison), The A-Team (starring Dwight Schultz), Quantum Leap (starring Scott Bakula and Dean Stockwell, in an episode with Ron Taylor), and Walker, Texas Ranger (with Noble Willingham).

Additionally, Alaimo had a recurring role on Hill Street Blues, as Gene Scapizzi, from 1985 through 1987. Besides series regulars Barbara Babcock, Barbara Bosson, Megan Gallagher, and James B. Sikking (whom Alaimo had worked with previously), other Star Trek alumni he worked on the series include Richard Herd, Gregory Itzin, Michael Keenan, David Selburg, Lawrence Tierney, and Kenneth Tigar.

Alaimo spent the majority of the 1990s focusing on his role as Gul Dukat for Deep Space Nine. He has not appeared in any other live-action TV role since Deep Space Nine ended in 1999; his only television performance since then was the voice of “The Dean of the Secret Order of Dirty Joke Writers” in a 2010 episode of Family Guy, created by Star Trek fan Seth MacFarlane.

In 1980, Alaimo was seen opposite Chevy Chase and Goldie Hawn in the romantic comedy Seems Like Old Times. In 1984, he had a role in the cult science fiction classic The Last Starfighter, also featuring Barbara Bosson and Meg Wyllie. And in 1988, he appeared in Clint Eastwood’s fifth installment of the “Dirty Harry” film series The Dead Pool, also starring Louis Giambalvo, Ronnie Claire Edwards, and Kristopher Logan.

Ron Canada is an actor who appeared in three episodes of Star Trek: The Next Generation, Star Trek: Deep Space Nine, and Star Trek: Voyager.

Canada appeared in numerous films, such as Adventures in Babysitting, The American President, and National Treasure, as well as having a recurring role in the television series The West Wing.

He also had a guest role in Babylon 5, and also a one-off role in Frasier.

In 2005 he appeared in the comedy Wedding Crashers.

Spice Williams, known as Spice Williams-Crosby since 2003, is an action actress, stunt woman, and stunt coordinator who portrayed the Klingon Vixis in Star Trek V: The Final Frontier.

Williams-Crosby was born as Marceline Ann Williams on a ranch in North Hollywood, California. She began her career in show business as a singer and dancer before becoming a stunt performer. She is also a famous bodybuilder and a vegan. Williams-Crosby married Gregory Crosby – the first grandson of Bing Crosby and half-brother to Denise Crosby – on 26 August 1989.

In addition to her roles on Star Trek, she has appeared in or performed stunts for over 100 films and television programs, including Roseanne and From Dusk till Dawn, and has doubled for actresses like Louise Fletcher and Meg Foster.

In 2004, Williams-Crosby auditioned for the part of a boxer alongside friend and stunt woman Rosine “Ace” Hatem in Clint Eastwood’s Academy Award winning drama Million Dollar Baby. While Hatem was cast as a boxer, Williams-Crosby got the part of an Irish fan and had to learn this special language. Most of her scenes ended up on the cutting room floor.

In 2009 Williams-Crosby voiced the role of Captain Merrick in the fan produced audio series Star Trek: The Continuing Mission.

Doren Fein is an actress from Texas who portrayed Molly in the Star Trek: Deep Space Nine episode “Children of Time”.

She was a main cast member on Hearts Afire (which also starred Leslie Jordan) and Days of Our Lives.

Her motion picture credits include Rage (with Kenneth Tigar) and Ed (with Bill Cobbs). Fein also appeared in the television movies Undue Influence and To Dance with Olivia (with William Schallert).

Alan Louis Oppenheimer is an American actor and voice actor. He has performed numerous roles on live-action television since the 1960’s, and has had an active career doing voice work in cartoons since the 1970’s.

As a character actor, Oppenheimer has had diverse roles in popular American television programming, from playing a Nazi in Hogan’s Heroes, to playing an Israeli secret agent as well as a double-agent KAOS scientist on Get Smart, to being the second actor to play Dr. Rudy Wells in The Six Million Dollar Man

He was the original Mickey Malph (Ralph Malph’s dad) on Happy Days.

He played a recurring role during the first two seasons of St. Elsewhere as Helen Rosenthal’s husband, Ira.

He had a recurring role as Mayor Alvin B. Tutwiller on Mama’s Family.

Alan showed himself well suited to the science fiction genre in the 1973 cult classic Westworld, where he played the head IT technician.

He has also appeared in three Star Trek series, always playing a different character. He appeared in the Star Trek: The Next Generation episode “Rightful Heir” as a Klingon cleric, Koroth, a primary instigator of the cloning of Kahless; on Deep Space Nine as a Starfleet Captain Declan Keogh in command of the USS Odyssey; and as an alien ambassador in Voyager.

Oppenheimer is recognized as the voice of many characters, often for Filmation in the 1970’s and 1980’s, such as Oil Can Harry, Swifty and the narrator on The New Adventures of Mighty Mouse and Heckle & Jeckle, Ming the Merciless on Flash Gordon, the Overlord on BlackStar, Skeletor, Man-At-Arms and Mer-Man from Filmation’s 1980’s cartoon He-Man and the Masters of the Universe, and the voice of Prime Evil in the 1986 TV series, Filmation’s Ghostbusters.

Other notable voice roles include Thundarr the Barbarian, Vanity on The Smurfs, Rhinokey and Crock from The Wuzzles and Falkor, Gmork, Rockbiter, and the Narrator from 1984’s The Never Ending Story.

In the early 1990’s, Oppenheimer was the voice of Merlin in The Legend of Prince Valiant. He also provided the voice of Barkerville in the Pound Puppies TV special. He also voiced Fraidy Cat on Fraidy Cat in 1975 and provided additional voices on Battle of the Planets in 1978.

Oppenheimer worked on The Transformers, most notably as two contrasting characters, the pacifist Beachcomber and the bellicose Warpath. His rendition of Seaspray was remarkably similar to Mer-Man, including the gurgling effects. He took over the voice of Roger Smith’s butler Norman Burg in the second season of The Big O. He was the voice of the unseen Alistair Crane on the soap opera Passions up until 2004, when the character was made fully visible and played by David Bailey. More recently, he provided the voice of the Scientist for the 2009 film 9 and Batman’s butler Alfred Pennyworth in Superman/Batman: Public Enemies.

Oppenheimer’s repertoire also includes video games, voicing Dr. Piotr Ivanovich in Soldier of Fortune II: Double Helix, Prometheus in God of War II and Jandor the Airship Captain in Nox. In Fallout: Brotherhood of Steel, he spoke the part of Harold, an ancient mutated survivor of nuclear holocaust who has appeared in four of the Fallout series games, and played the roles of The Chariot Master and Dyntos, God of the Forge, in Kid Icarus: Uprising. Oppenheimer also voiced the parts of a non-player character Soldier and the Wasteland Trader, and the NPC ‘enemies’ Cult Ghoul Thug and Kamikaze in Fallout: BoS. Also, in the English TG-16 port of Ys Book I and II, Oppenheimer voiced the roles of the Narrator, and the game’s lead antagonist, Darm.

In 2019 he guest-starred on the animated series Tigtone.

Simone Michelle Boisseree is a stunt woman whose work includes two episodes of Star Trek: Deep Space Nine. She portrayed the Norkova captain in the episode “The Passenger” and doubled Michelle Krusiec in the episode “Time’s Orphan”. Boisseree received no credit for these appearances.

Iggy Pop (born James Newell Osterberg, Jr.) is an American singer-songwriter, musician and actor. Osterberg became known as “Iggy” in high school, when he served as drummer for a local blues band, The Iguanas. He is vocalist of influential protopunk band The Stooges, who reunited in 2003, and has been known for his outrageous and unpredictable stage antics.

Pop’s music has encompassed a number of styles over the course of his career, including rock, hard rock, new wave, jazz, art rock and blues. Though his popularity has fluctuated through the years, many of Pop’s songs have become well-known, including “Lust for Life”, “The Passenger”, “Real Wild Child”, “Candy” (a duet with Kate Pierson of The B-52’s), “China Girl”, “Nightclubbing”, “Search and Destroy” and “I Wanna Be Your Dog”.

In 2010, The Stooges were inducted into the Rock and Roll Hall of Fame.

Clint Howard is the brother of actor and director Ron Howard and the son of actor Rance Howard. Clint’s career began at the age of one, with a role in The Andy Griffith Show, a television show that starred his brother. He has worked steadily since, with roles in a number of the films his brother directs, and roles in a number of B-movies as well. His Star Trek work includes appearances in three of the series. In 1989, Howard joined other Trek alumni by acting in the cop film Tango & Cash.

Along with Majel Barrett, Joseph Ruskin, Jack Donner and Vince Deadrick, he is one of only five actors to appear in both Star Trek: The Original Series and Star Trek: Enterprise. He, Barrett, and Ruskin also appeared in Star Trek: Deep Space Nine.

On Comedy Central’s August 2006 roast of William Shatner, Howard reprised his role as Balok in an older, grown-up form addicted to tranya.

Synopsis: With mounting losses in the Federation-Dominion war, and the specter of defeat, Captain Sisko enlists Garak’s help to “persuade” the Romulans to join the Federation/Klingon alliance to win the war. Sisko unwittingly learns that to save the Federation, he may have to sell his soul and the values Starfleet stands for. 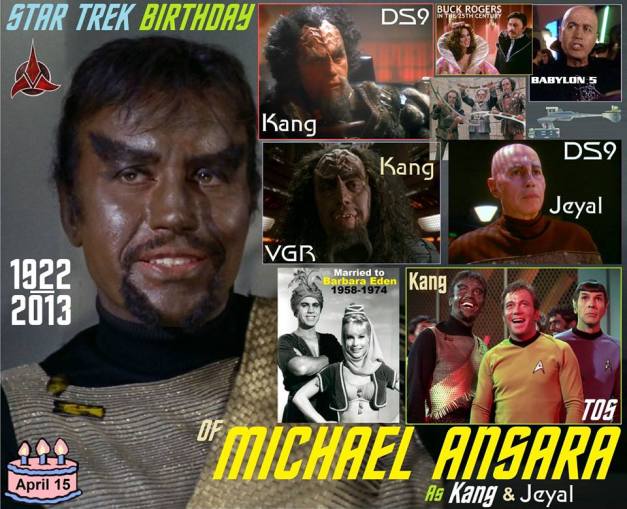 Michael George Ansara was an American stage, screen, and voice actor. He portrayed Cochise in the television series Broken Arrow, Kane in the 1979–1981 series Buck Rogers in the 25th Century, Commander Kang in three different Star Trek television series, Deputy U.S. Marshal Sam Buckhart in the NBC series Law of the Plainsman, and provided the voice for Mr. Freeze in Batman: The Animated Series and several of its spin-offs.

He was one of eleven actors to play the same character (Kang) on three different Star Trek TV series. The other actors who hold this distinction are Leonard Nimoy, DeForest Kelley, James Doohan, Mark Lenard, George Takei, Jonathan Frakes, Marina Sirtis, Armin Shimerman, John de Lancie, and Richard Poe.
He was also in I Dream Of Jeannie, as the evil Jin.

In 1994, Ansara portrayed the Technomage Elric in the science fiction television series Babylon 5 in the episode “The Geometry of Shadows.

Ansara died from complications of Alzheimer’s disease at his home in Calabasas on July 31, 2013, at the age of 91.