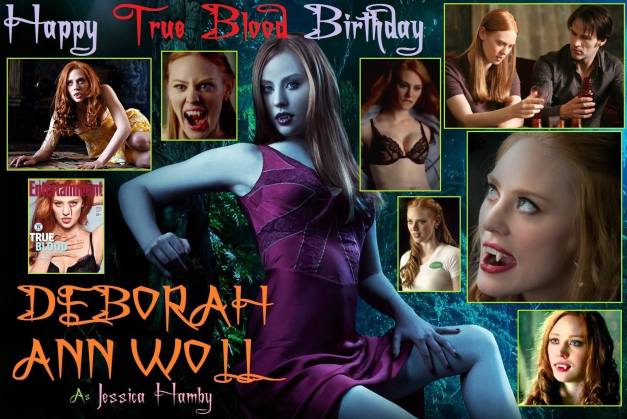 Deborah Ann Woll is an American actress best known for her role as Jessica Hamby on HBO’s True Blood.
She plays Karen Page in the Netflix drama series Daredevil, The Defenders, and The Punisher.
She has also starred in the films Mother’s Day, Someday This Pain Will Be Useful to You, Catch .44, Ruby Sparks, and Meet Me in Montenegro.

Posted by travelingwithjim on February 1, 2017
Posted in: Doctor Who, February, Random TV, The Real Nerd Herd, Uncategorized. Leave a comment

Elisabeth Clara Heath-Sladen was an English actress best known for her role as Sarah Jane Smith in the British television series Doctor Who. She was a regular cast member from 1973 to 1976, alongside both Jon Pertwee and Tom Baker, and reprised the role many times in subsequent decades, both on Doctor Who and its spin-offs, K-9 and Company and The Sarah Jane Adventures.

Sladen was interested in ballet and theatre from childhood, and began to appear on stage in the mid-1960s, although more often as a stage manager at this time. She moved to London in 1970 and an appearance in the police drama Z-Cars led to her being selected for a part in Doctor Who. She stayed as a regular cast member alongside Pertwee and Baker until 1976. She subsequently starred in other roles on both television and radio, before semi-retiring to bring up a family in the mid-1980s.

She returned to the public eye in the 2000s with more Doctor Who related appearances, which culminated in taking a regular lead role in The Sarah Jane Adventures. The show earned the Royal Television Society 2010 award for Best Children’s Drama. She also made regular guest appearances on the main television series, and provided voice-over commentaries for its releases to DVD.

Sladen died of cancer on 19 April 2011. Her death made national and international news headlines, and major television stations and newspapers paid her tribute. 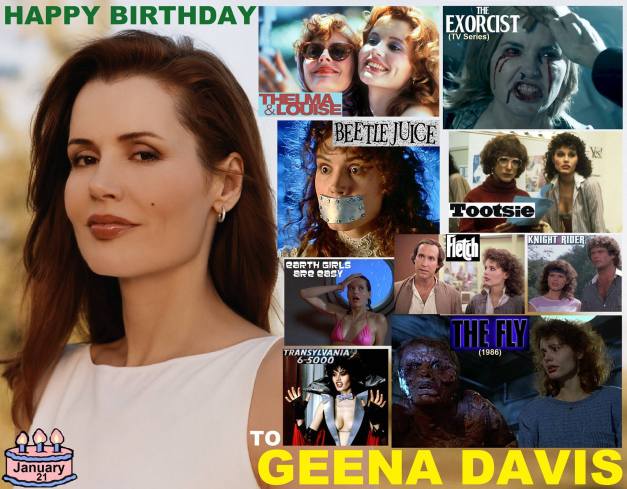 Virginia Elizabeth “Geena” Davis is an American actress, film producer, writer, former fashion model. She is known for her roles in The Fly (1986), Beetlejuice (1988), Thelma & Louise (1991), A League of Their Own (1992), The Long Kiss Goodnight (1996), Stuart Little (1999), and The Accidental Tourist, for which she won the 1988 Academy Award for Best Supporting Actress.
In 2005, Davis won the Golden Globe Award for Best Actress – Television Series Drama for her role in Commander in Chief. In 2014, she returned to television portraying Dr. Nicole Herman in Grey’s Anatomy. She was nominated for an Academy Award for Best Actress along with her co-star Susan Sarandon for Thelma and Louise. Davis is starring as Regan MacNeil/Angela Rance in the horror TV series “inspired by” the best-selling William Peter Blatty novel The Exorcist, on Fox.
https://therealnerdherd.wordpress.com/
https://www.facebook.com/therealnerdherd/
#therealnerdherd #geenadavis #birthday #january21 #theexorcist #beetlejuice #thelmaandlouise #thefly #ALeagueofTheirOwn #thelongkissgoodnight #StuartLittle #TheAccidentalTourist #AcademyAward #CommanderinChief #GreysAnatomy #

Posted by travelingwithjim on April 1, 2014
Posted in: The Real Nerd Herd. Tagged: the nerd herd, the real nerd herd. Leave a comment

Come to the dark side … I mean the nerd herd.