Stephen Russell Davies, better known as Russell T Davies, is a Welsh screenwriter and television producer whose works include Queer as Folk, Bob & Rose, The Second Coming, Casanova, the 2005 revival of the classic British science fiction series Doctor Who, and the trilogy Cucumber, Tofu, and Banana.

He revived and ran Doctor Who after a sixteen-year hiatus, with Christopher Eccleston, and later David Tennant, in the title role. Davies’ tenure as executive producer of the show oversaw a surge in popularity that led to the production of two spin-off series, Torchwood and The Sarah Jane Adventures, and the revival of the Saturday prime-time dramas as a profitable venture for production companies. Davies was appointed an OBE in 2008 for services to drama, which coincided with his announcement that he would step down from Doctor Who as the show’s executive producer with his final script, The End of Time (2009–10). Davies moved to Los Angeles, California in 2009, where he oversaw production of Torchwood: Miracle Day and the fifth and final series of The Sarah Jane Adventures.

Peter Dougan Capaldi is a Scottish actor, writer and director. He has played numerous roles in film and television including the role of Malcolm Tucker, a spin doctor in the BBC comedy series The Thick of It and its film spinoff In the Loop, for which he has received four British Academy Television Award nominations, winning Best Male Comedy Performance in 2010.

He is best known for being the twelfth actor to play the title role in the long-running BBC One sci-fi series Doctor Who.

As a director, he won the 1995 Academy Award for Best Live Action Short Film as well as the British Academy Film Award for Best Short Film the year before for his short film Franz Kafka’s It’s a Wonderful Life.

Freema Agyeman (born Frema Agyeman) is an English actress who is known for playing Martha Jones in the BBC science fiction series Doctor Who and its spin-off series Torchwood, and Amanita Caplan in the Netflix science fiction drama Sense8.

Following her departure from Doctor Who and a role in the BBC series Little Dorrit, Agyeman held a starring role as Alesha Phillips in the crime procedural drama Law & Order: UK between 2009 and 2012.

In 2013, she made her US television debut on The CW’s teen drama The Carrie Diaries as Larissa Loughlin, a style editor at Interview magazine.

In 2018, she became part of the main cast of the NBC medical procedural series New Amsterdam.

John Scot Barrowman, is a Scottish-American actor, singer, dancer, presenter and writer who holds both British and American citizenship. Born in Glasgow, Scotland, he emigrated to the United States with his family in 1975. Encouraged by his high school teachers, Barrowman studied performing arts at the United States International University in San Diego before landing the role of Billy Crocker in Cole Porter’s Anything Goes at London’s West End.

Since his debut in professional theatre, Barrowman has played lead roles in various musicals both in the West End and on Broadway, including Miss Saigon, The Phantom of the Opera, Sunset Boulevard and Matador.

After appearing in Sam Mendes’ production of The Fix, he was nominated for the 1998 Laurence Olivier Award for Best Actor in a Musical and, in the early 2000s, returned to the role of Billy Crocker in the revival of Anything Goes. His most recent West End credit was in the 2009 production of La Cage aux Folles.

Aside his theatrical career, Barrowman has appeared in various films including the musical biopic De-Lovely (2004) and musical comedy The Producers (2005). Before venturing into British television, he featured in the American television dramas Titans and Central Park West but he is better known for his acting and presenting work for the BBC that includes his work for CBBC in its earlier years, his self-produced entertainment programme Tonight’s the Night, and his BAFTA Cymru-nominated role of Captain Jack Harkness in the science fiction series Doctor Who and Torchwood.

Barrowman has also had a number of guest roles in television programs both in the US and the UK. He appeared as a contestant on the first series of celebrity ice skating show Dancing on Ice while his theatrical background allowed him to become a judge on Andrew Lloyd Webber’s musical talent shows How Do You Solve a Problem like Maria?, Any Dream Will Do and I’d Do Anything. In 2006, he was voted Stonewall’s Entertainer of the Year. Starting in 2013, he hosts the BBC One quiz show Pressure Pad.

Barrowman is in the CW’s Arrow as Malcolm Merlyn.

Barrowman is also featured on more than a dozen musical theatre recordings including cover tunes found on his 2007 album, Another Side, and 2008’s Music Music Music. Both albums accrued places on the UK Albums Chart, as did his self-titled John Barrowman (2010), which reached number 11, his highest chart placing to date. Furthermore, Barrowman has published two memoirs and autobiographies, Anything Goes (2008) and I Am What I Am (2009), with his sister Carole as co-author. The siblings also teamed up to write a novel, Hollow Earth (2012). The second book in the series, Bone Quill, has been released. 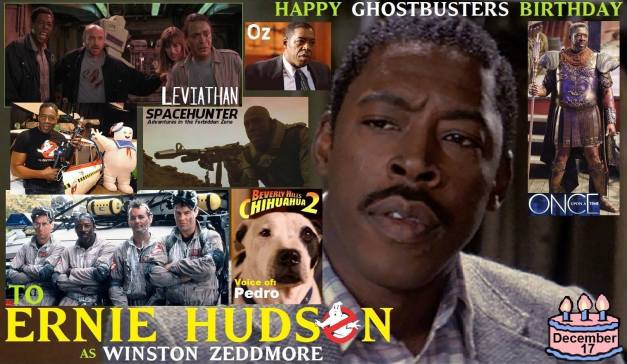 Having appeared in dozens of film and television roles throughout his career, he is perhaps best known for his roles as Winston Zeddemore in the Ghostbusters film series, Sergeant Darryl Albrecht in The Crow (1994), and Warden Leo Glynn on HBO’s Oz. Hudson has also acted in movies like Leviathon (1989), The Hand That Rocks the Cradle (1992), Airheads (1994), The Basketball Diaries (1995), Congo (1995), and Miss Congeniality (2000). He had a cameo in the remake of Ghostbusters (2016).

One of Hudson’s early films was in Penitentiary II (1982) starring Leon Isaac Kennedy. He landed various guest roles on television series such as The Dukes of Hazzard and The A-Team. He was on the television series Fantasy Island in a first-season episode as a voodoo man named Jamu. Hudson gained fame playing Winston Zeddemore, who enlists with the Ghostbusters in the feature film Ghostbusters (1984) and its 1989 sequel. He also auditioned to reprise the role for the animated series, The Real Ghostbusters, but it was given to Arsenio Hall. He had a major supporting role as the mentally challenged handyman Solomon in The Hand that Rocks the Cradle (1992).
Hudson was cast as Warden Leo Glynn on HBO’s series Oz. On Oz, his son Ernie Hudson Jr. co-starred with him as Muslim inmate Hamid Khan. Hudson also appears as the character Munro in Congo (1995) and as Police Sergeant Albreact in The Crow (1994). He switched gears when he played a preacher opening the eyes of a small town prejudice in the 1950s in Stranger in the Kingdom. He is also known for his role as Harry McDonald, the FBI superior of Sandra Bullock’s character in the feature film Miss Congeniality (2000).

He appears in the Stargate SG-1 episode “Ethon” as Pernaux. Hudson also appeared as Reggie in the film The Basketball Diaries (1995). In 2006, he appeared in the television movie The Ron Clark Story as Principal Turner. In 2008, he began a recurring role as Dr. Fields on The Secret Life of the American Teenager. Hudson also had a recurring role on the final season of Law & Order as Lt. Anita Van Buren’s boyfriend and then fiancé.

In 2011, he played Stuart Owens in Torchwood: Miracle Day.

Beginning in 2015, Hudson was cast in a recurring role as Jacob, an organic farmer who is the romantic interest for Frankie Bergstein (Lily Tomlin) in the series Grace and Frankie.

James Wesley Marsters is an American actor and musician. Marsters first came to the attention of the general public playing the popular character Spike, a platinum-blond English vampire in the television series Buffy the Vampire Slayer and its spin-off series, Angel, from 1997 to 2004. Since then, he has gone on to play other science fiction roles, such as the alien supervillain Brainiac on the Superman-inspired series Smallville, the omnisexual time traveller Captain John Hart in British science-fiction show Torchwood, and terrorist Barnabas Greeley in Syfy’s Caprica. Marsters appeared in a supporting role in the 2007 movie P.S. I Love You. He appeared as a recurring character in the first season of the revival of Hawaii Five-0.

Eve Myles is a Welsh actress. She graduated from the Royal Welsh College of Music & Drama in 2000. Later that year, she began portraying Ceri Lewis in the Welsh language drama series Belonging, a role she would play until the end of the series in 2009. Myles’ early UK television credits included the 2001 miniseries Tales from Pleasure Beach, the 2003 television drama Colditz and, as servant girl Gwyneth, the 2005 Doctor Who episode “The Unquiet Dead”.

Her appearance in Doctor Who led to her winning a lead role in the science fiction drama’s spin-off series Torchwood, in which she portrayed the character Gwen Cooper between 2006 and 2011. Myles role in Torchwood earned her a Bafta Cymru award for Best Actress in 2007. Myles also reprised the role of Gwen in the 2009 and 2011 series of Torchwood Radio Plays as well as in 2015 as part of the Torchwood (Big Finish series). Myles subsequent television credits include the 2008 miniseries Little Dorrit, the 2008 premiere episode of the fantasy drama Merlin and the 2013 drama series Frankie in which she played the title role. In 2014 she was cast in the second series of the crime drama series Broadchurch portraying the character of Claire Ripley. In 2011 she voiced one of the main characters in the video game Dragon Age II.

An accomplished theatre actress, Myles won an Ian Charleson Award in 2004 for her performances in Royal Shakespeare Company productions of the plays Titus Andronicus and The Taming of the Shrew. Further theatre credits include Henry IV, Part I and II at the National Theatre in 2004, and the role of Emma in the first UK run of Zach Braff’s play All New People in 2012.