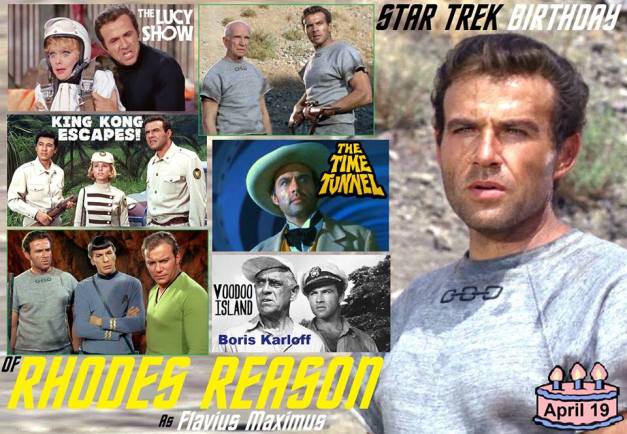 Before retiring to Oregon in 1977, he had held television and movie acting roles for nearly forty years.

Films that Reason has appeared in include Tension at Table Rock (1956, with DeForest Kelley) and Cat Murkil and the Silks (1976, with Steve Bond). In 1977, Reason appeared in the television movie A Sensitive, Passionate Man (with Elizabeth Rogers).

Actor Arthur Batanides appeared on Star Trek: The Original Series, playing Lieutenant D’Amato, the Senior Geologist of the starship Enterprise, in the episode “That Which Survives”.

Batanides has made numerous other television appearances, having guest-starred on several episodes of Happy Days, The Odd Couple, The Wild Wild West, The Outer Limits (“Specimen: Unknown” directed by Gerd Oswald), and Mission: Impossible (the latter of which was, like TOS, originally produced by Desilu).

One of Batanides’ earliest motion picture appearances was in the 1956 biblical epic The Ten Commandments. Judith Anderson, Lawrence Dobkin, Michael Ansara, Bobby Clark and Robert Herron also had roles in this film.

He had a supporting role opposite Brian Keith in the film Violent Road in 1958 and also appeared in the 1961 film Man-Trap (not to be confused with the TOS episode “The Man Trap”), which starred Jeffrey Hunter. His other films include 1969’s The Maltese Bippy (with Julie Newmar and Fritz Weaver), 1975’s Brannigan starring John Wayne), and the 1976 made-for-TV movie The Lindbergh Kidnapping Case, which starred Cliff DeYoung and featured Laurence Luckinbill and Bill Quinn. Another TV movie he appeared in was 1979’s The Last Hurrah, featuring Robert Brown, Stewart Moss, Bill Quinn, and James B. Sikking.

In the 1980s, the only film role Batanides played was that of Old Max Kirkland in four of the Police Academy sequels, beginning with 1985’s Police Academy 2: Their First Assignment. .

On television, Batanides appeared as Batu Kahn in an episode of The Time Tunnel, starring James Darren, Whit Bissell and Lee Meriwether, which was co-written by Robert Hamner. He also appeared in two episodes of The Twilight Zone, including “Mr. Denton on Doomsday”, co-starring Ken Lynch and Bill Erwin, and a Gerd Oswald-directed episode of The Outer Limits, featuring Walt Davis, Robert C. Johnson, and Vic Perrin as the “Control Voice”, and make-ups by Fred Phillips. He also appeared in an episode of Land of the Giants, starring Don Marshall, and guest starring Joseph Ruskin and Arch Whiting, an episode of The Mod Squad, starring Tige Andrews, Clarence Williams III, produced by Harve Bennett, and an episode of It Takes a Thief, directed by Oswald and guest starring Francine Pyne.

He also guest starred in an episode of Galactica 1980, alongside Marj Dusay, Peter Mark Richman and Ken Lynch. 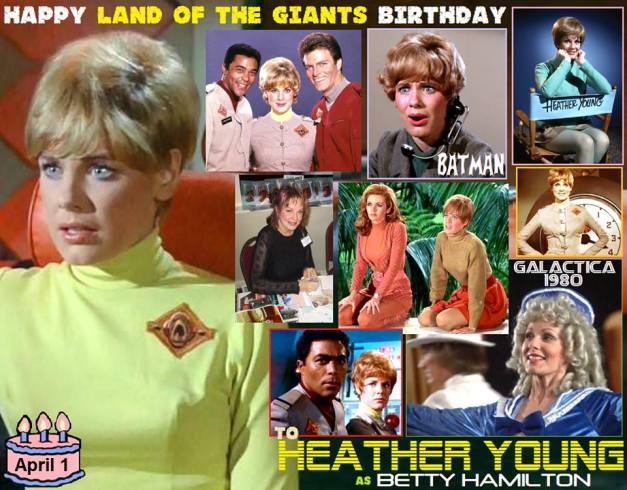 Heather Young (born Patricia Kay Paterson) is a former actress who is best known for playing the character Betty Hamilton on the television series Land of the Giants.

She began her entertainment career as a singer at Disneyland. In 1967 she had a number of small roles in shows such as the Batman television series and the courtroom series Judd for the Defense.

Her first experience of working with Irwin Allen was in the final episode of The Time Tunnel called “Town of Terror”.

She was also in a two-part episode in Galactica 1980, appearing in the second part called “The Night the Cylons Landed”. 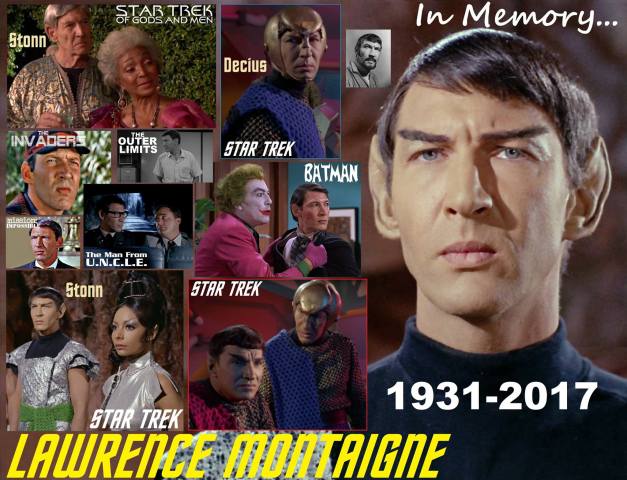 Born in New York, but raised in Rome, Italy, Montaigne speaks several languages, a skill he used to his advantage in securing roles in international productions. He served in the United States Marine Corps and was only one platoon apart in the Parris Island boot camp from his future friend Steve McQueen.

He appeared in the role of Dr. Chauncy Hartlund in the 1965 Perry Mason episode, “The Case of the Carefree Coronary.”

Lawrence Montaigne portrayed one of the first Romulans on Star Trek, Decius, in the Star Trek: The Original Series episode “Balance of Terror”. He later played a Vulcan named Stonn in “Amok Time”.

In addition, he guest starred on Batman, Voyage to the Bottom of the Sea, The Man From U.N.C.L.E., Blue Light, Mission: Impossible, The Time Tunnel, The Invaders, Perry Mason, McCloud, and The Feather and Father Gang..

In 2007, Montaigne returned to the role of Stonn in the fan film Star Trek: Of Gods and Men. In late 2007 Montaigne portrayed Commander Vellar in the pilot episode of the audio series Star Trek: The Continuing Mission. 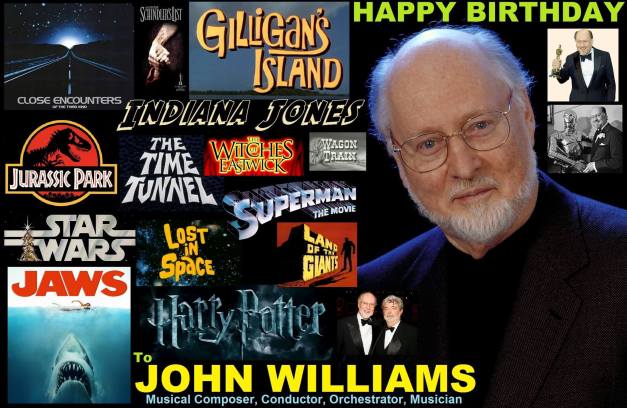 John Towner Williams is an American composer, conductor, and pianist. He is considered one of the greatest film composers of all time. In a career spanning over six decades, he has composed some of the most popular and recognizable film scores in cinematic history, including Jaws, Family Plot (Alfred Hitchcock’s final film), the Star Wars series, Superman, the Indiana Jones series, E.T. the Extra-Terrestrial, the first two Home Alone films, Hook, the first two Jurassic Park films, Schindler’s List, Saving Private Ryan, the first three Harry Potter films, Catch Me If You Can, Memoirs of a Geisha, War Horse, and Lincoln. He has had a long association with director Steven Spielberg, composing the music for all but one (The Color Purple) of Spielberg’s major feature-length films.

Other notable works by Williams include theme music for four Olympic Games, NBC Sunday Night Football, the NBC Nightly News, the Statue of Liberty’s rededication, the television series Lost in Space and Land of the Giants, and the original, not as well known calypso-based theme song to Gilligan’s Island. Williams has also composed numerous classical concerti, and he served as the Boston Pops Orchestra’s principal conductor from 1980 to 1993; he is now the orchestra’s conductor laureate.

Williams has won five Academy Awards, four Golden Globe Awards, seven British Academy Film Awards and 21 Grammy Awards. With 49 Academy Award nominations, Williams is the second most-nominated person, after Walt Disney. Williams was honored with the annual Richard Kirk award at the 1999 BMI Film and TV Awards, recognizing his contribution to film and television music. Williams was inducted into the Hollywood Bowl Hall of Fame in 2000, and was a recipient of the Kennedy Center Honors in 2004.

Paul Wallace Carr was an American actor who portrayed Lieutenant Lee Kelso in the Star Trek episode”Where No Man Has Gone Before”.

He was in a 1959 episode of The Rifleman. He was on an episode of the 1966 show The Time Tunnel. Other series on which Carr appeared include Combat! (1966), The Invaders (1967), and the Robert Lansing series Twelve O’Clock High (1964). He also played Crewman Clark during the first season of Voyage to the Bottom of the Sea.

His voice credits include the role of Matsuoka in the Japanese anime Ghost in the Shell: Stand Alone Complex / Kôkaku kidôtai: Stand Alone Complex (2002,), and Screaming Mad George, the special effects wizard for science fiction horror films such as Bride of Re-Animator as well as the voice of the school headmaster in the Japanese anime Blood: The Last Vampire (2000).

Carr died of complications from lung and brain cancer on 17 February 2006. He was 72 years old. 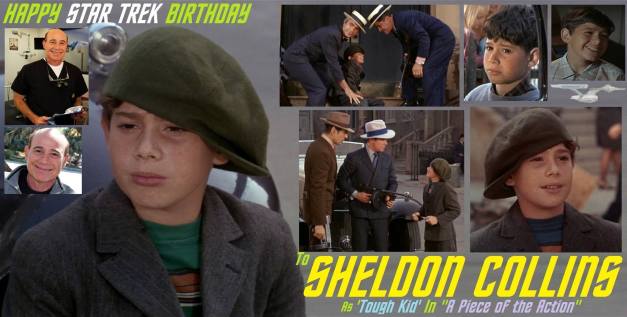 Sheldon Collins (born Sheldon S. Golomb) portrayed a tough kid in the Star Trek: The Original Series episode “A Piece of the Action”.

He had a recurring role as Arnold Bailey on the television series The Andy Griffith Show and appeared in the 1966 film The Russians Are Coming.

He also appeared in an episode of The Time Tunnel, where he played the young version of James Darren’s character.

David Opatoshu, born David Opatovsky, was the actor who played Anan 7 in the Star Trek episode “A Taste of Armageddon”.

Opatoshu enjoyed a career that spanned five decades, almost a hundred television guest appearances, and forty-five movie and television roles. His Semitic features and knowledge of the Yiddish language led to frequent roles as Jewish or Arabic characters. Well known roles include Menachem Begin in Raid on Entebbe, and one of the lead characters in a 1980s miniseries about the Roman siege of Masada.

He also had a small role in the Oscar-winning 1958 film, The Brothers Karamazov, which also featured Harry Townes and William Shatner.

Torin Herbert Erskine Thatcher was the actor who played Marplon in the Star Trek: The Original Series episode “The Return of the Archons”.

Thatcher was an Indian born British character actor, whose film career started in 1933, and his television career in 1949. He often played villains.

Thatcher portrayed Senator Gallio in 20th Century Fox’s biblical epic, The Robe. His film career was largely over by the end of the sixties, but he continued to work sporadically in both film and television until the middle seventies. He succumbed to cancer in 1981.

He is present in deleted scenes of the 1962 film “Mutiny on the Bounty”, featuring the original HMS Bounty as the setting.

Thatcher was a favorite actor of B-movie science fiction and fantasy director Nathan Juran. He also frequently appeared in Irwin Allen’s television shows, including an episode of Lost in Space (starring Bill Mumy) and an episode of The Time Tunnel (starring James Darren, Lee Meriwether and Whit Bissell).

Robert Selden Duvall is an American actor and director. He has been nominated for six Academy Awards (winning for his performance in Tender Mercies), six Golden Globes (winning four), and has multiple nominations and one win each of the BAFTA, Screen Actors Guild Award, and Emmy Award. He received the National Medal of Arts in 2005. He has starred in some of the most acclaimed and popular films and television series of all time, including The Twilight Zone, The Outer Limits, To Kill a Mockingbird, THX 1138, Colors, Joe Kidd, The Godfather, The Godfather Part II, MASH, Network, The Apostle, True Grit, The Conversation, Apocalypse Now, Falling Down, Tender Mercies, The Handmaid’s Tale, The Natural, Lonesome Dove, and Get Low.

He began appearing in theater during the late 1950s, moving into television and film roles during the early 1960s, playing Boo Radley in To Kill a Mockingbird (1962) and appearing in Captain Newman, M.D. (1963). He landed many of his most famous roles during the early 1970s, such as Major Frank Burns in the blockbuster comedy MASH (1970) and the lead role in THX 1138 (1971), as well as Horton Foote’s adaptation of William Faulkner’s Tomorrow (1972), which was developed at The Actors Studio and is Duvall’s personal favorite.This was followed by a series of critically lauded performances in commercially successful films.